Back in the 1950’s Palm Springs was a haven for the Rat Pack and celebrities like Bing Crosby, Kirk Douglas, Frank Sinatra and Bob Hope. These guys were nothing like what we have back home in New England where our historic celebrities include Nathan Hale and Paul Revere.

Frankly, I love the vibe of this town. It seems EVERYONE in Palm Springs is into design. For example, check out Trina Turk, a clothing designer, who’s also a passionate preservationist and architecture enthusiast who launched her brand back  in 2002 and is now a global icon.

During Modernism Week I attended several seminars, but one of the best was on Alexander Girard. The event, hosted by Marvin Windows, showcased Girard’s amazing contributions to branding, graphics, architecture and more.

Suzanne Somers (see photo), the Thigh Master, was there!

Afterwards I was speaking to the former CEO of Dwell magazine, Michela Abrams, who offered, “I want to show you the Kirk Douglas House.”

Sounded good to me.  My trip-mates couldn’t believe it.  A Kaufman-house-esque performance, Act II, and the next day there we were. As tour buses paused outside, we actually were inside the residence getting a highly – detailed tour and description of the renovation by the new homeowners.  Mind you, there’s still plenty of evidence of the former owners, including the K – shaped pool and a TV room shellacked with posters of Kirk’s many films. 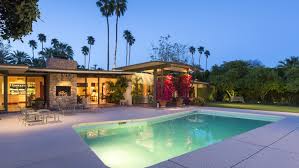